The Great Flu Epidemic of 1918

I stumbled onto this picture of Jared Dickson a few years ago.  This picture totally blew me away.  Look at the men and their solemn faces, their clothing tells of the harsh realities of life and the flag draped over the coffin tells of heartache  I had never heard of this man in my study of the Dickson line and those I asked about him seemed to have no answers for me.  I never knew that my Great Grandmother Sophia Dickson Weaver had a brother named Jared--- so a mystery I had on my hands.

"In the Fall of 1918 my next brother Jared enlisted in the Army and was stationed at For Logan, Colorado.  This was the year that the great Spanish influenza plague swept the country.  The little town of Richville  had its gethsemane too.  Dozens died in only a few days.  Our casualty came when our older brother, Abel J. Dickson, succumbed to the dread disease on 16th of October 1918, leaving a wife and five young children, and in another two days we received word that Jared had passed away at Fort Logan.  Mother had the disease, Elbern was down, and I was sick.  Abel was buried without a funeral and only a few remarks were given at the graveside...The sadness filled our home was almost more than we could take.  In several days Jared's corpse arrived at Morgan.  We were there to meet the train,  and as we went into the car for his remains, we noticed that the train was full of caskets...We brought him (Jared) and carried the casket into the house for mother to view.  This was more than I could take, and so I went upstairs and was followed by Elbern, who said, "Mother will be the next to die."  I knew that Mother would not die at that time because I had received a witness that she would live until I became a man"... Jared was buried in the Richville cemetery by his brother Abel."

In the fall of 1918, the Spanish Influenza had swept across America leaving rows and rows of caskets.  The little community of Richville, Utah was no different.  And the Dickson family- two caskets came home to Harriet.

The bodies of her  of her sons in uniform Jared and Abel.  She herself had succumbed to the epidemic and was to ill to attend  Abel's funeral.   I can only imagine her grief in those lonely sleepless hours.

Harriet's mother, Mary Jane Goodridge, crossed the plains in the Wilford Woodruff company.  She was baptized in the Platter river with her father and brother.  Harriet was blessed with the faith of her mother- this faith continues to bless Harriet's heritage today!

The last treasured photo of the entire Dickson Family 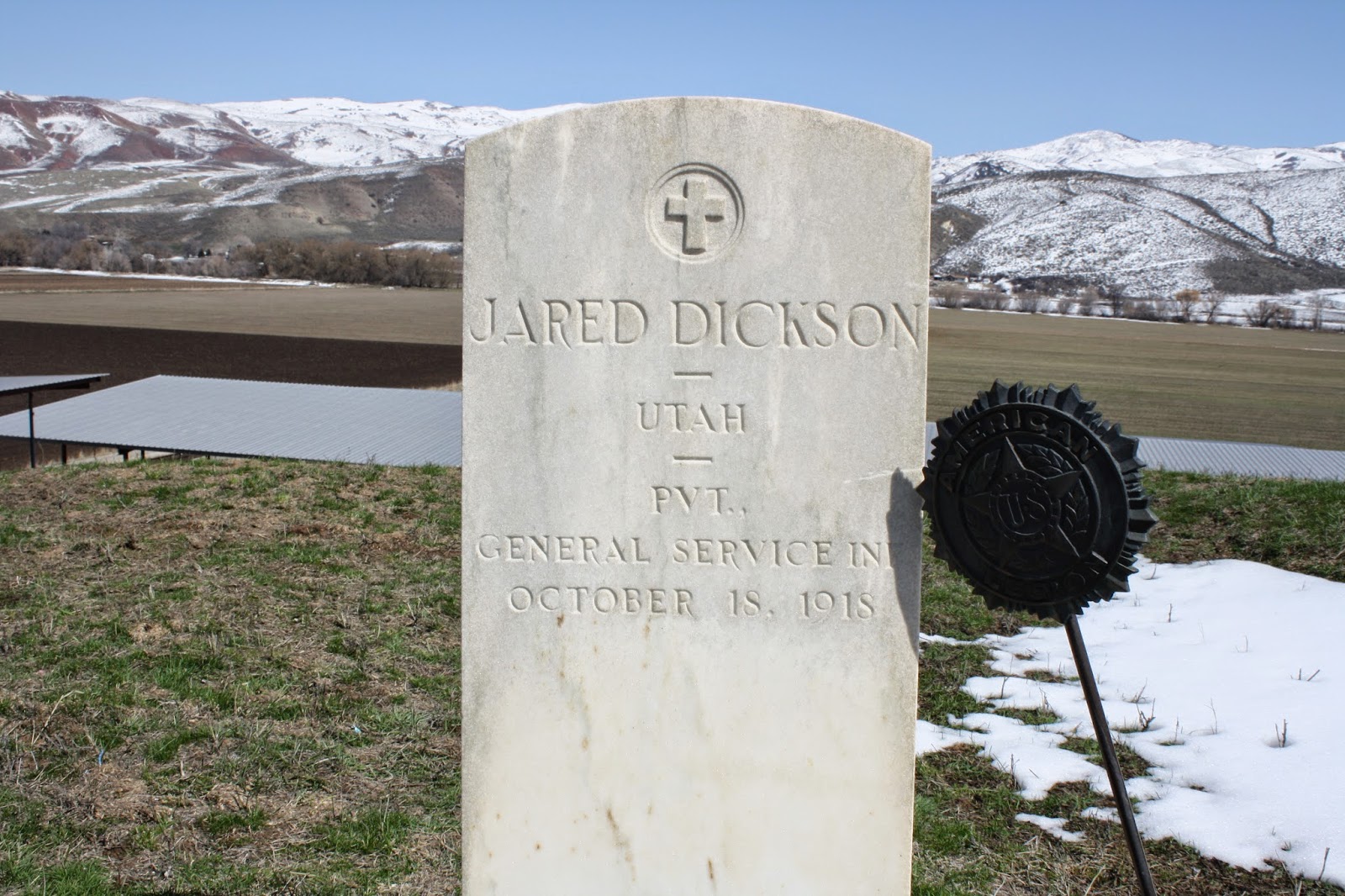 My Dickson Family- grew in the shadows of this castle- became colonists, Canadian soldiers, pioneers