I love graveyards.  They seem to sing the history of its city.  I like to wander through them.  I love to read the names and wonder what type of lives the buried person(s) led.   So lucky was I to come upon my local cemetery's date for its Halloween Moonlit historical tour.  Not knowing what to expect,  I was surprised by the variety and the number of people which joined this tour.  The ambiance was perfect for the approaching Halloween Holiday

Cedar City was built on the faith of its settlers.  Francis Webster is somewhat a folk hero to this community.. some might even call him a legend.  As a wealthy English convert to the Mormon Church, Martin donated  large sums of money so that other converts could come to "Zion."  Because of this sacrifice, he and his family were members of the ill fated Willie Handcart Company.  He suffered greatly but his faith carried him when his frozen limbs would not. Francis Webster is quoted for having said the following in regards to the Willie Handcart compy  in a Sunday School Class in the old rock church towards the end of his life, “I ask you to stop this criticism. You are discussing a matter you know nothing about. Cold historic facts mean nothing here, for they give no proper interpretation of the questions involved. Mistake to send the handcart company out so late in the season? Yes. But I was in that company and my wife was in it and Sister Nellie Unthank whom you have cited was there too. We suffered beyond anything you can imagine, and many died of exposure and starvation, but did you ever hear a survivor of that company utter a word of criticism? Not one of that company ever apostatized or left the Church, because everyone of us came through with the absolute knowledge that God lives, for we became acquainted with him in our extremities.”   As a member of this community, he was instrumental in bringing the sheep industry town as well as helping to oversee the building of the local college.    It was an honor to have visited his grave! 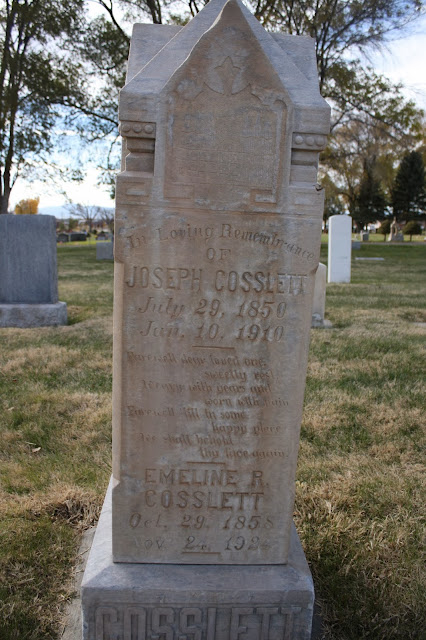 Many pioneer communities were founded on music.  Cedar City was no different.  Joseph Cosslett was the cultural icon of his era serving as the first choir director in this newly founded settlement.  Music lifted the spirits of the weary.  Joseph was loved by the members of this town.  He was a renowned musician who also wrote the beloved hymn, "We'll Sing All Hail to Jesus's name."  Inscribed on his headstone is the following: "  A tribute of love from your associates, the Cedar City Choir, and a grateful public for a life of faithful service."

George Wood was a prominent Cedar City citizen.  He opened his home to the weary, penniless traveler.  After building a new home on Main Street, his original log home was a place of refuge for many.  Twenty-five children were born there.

CJ Arthur Family- polygamist burial site- CJ Arthur  was unwilling to abandon his wives and family when the Church of Jesus Christ discontinued the practice of polygamy.  Because of this, he was considered an outlaw and hunted and imprisoned for his crime.  This is the only burial site of its kind in this cemetery.

As members of polygamist families, at burial children were identified by their mother.  This is reminiscent of the Hebrew culture.

The most infamous grave included on this tour was the grave of Mary McCune.   Engaged in her daily task in the hen house with a friend, Mary was attacked by a coyote.  The coyote clasped the neck of Mary.  Her friend yelled for her husband who came to the rescue.  In order to save the life of Mary, he had to strangle the coyote.  The gentlemen saved Mary's life but it was to late... the coyote was rabid.  Mary was placed in an institution because she had gone mad.   However, she became such  a threat to those around her that her life was ended.   Not known at the time was the fact that Mary was pregnant.  Her husband returned home to find both his wife and child dead and buried (her headstone tells this very story).

Time has worn the headstones of many graves here.  Some have crumbled others have been ruined by water.   Headstones such as this are lost to history... especially when early records are non existent.

The dates and names on graves intrigue me, but it is the dash about which I wonder most.  Of course, I like those buried here have a birth day,  and one day a date of my death will come.  But what matters most is what I do with the dash... what will you do with yours?

All Roads lead to home