How to Raise a missionary

Preface- I never thought I would say this, but I miss having a missionary out (hint, hint, Stockton). Seleck has been home nearly 2 1/2 months. Hard to believe. He is such a joy in our home and reminds us all to be a little better. He and Stockton worked concrete together since his return and Seleck missed the spanish people so much he found a job at a Mexican restaurant. Today he spent time with his communications adviser trying to figure out how to get to Mexico on a "study abroad" so he good be with "his people" again. He makes my mama heart so proud! I came across this post from , 2016 and thought I would share it again.

How to raise a missionary?

Years ago, I ironed his little white shirt and sent him off to nursery and then to primary.  He was a Sunbeam when the primary chorister asked him his name.  He replied, "Batman."

He grew and learned to share his testimony.  He stood at the pulpit with two hands on the podium like an apostle.  He had an "old soul."

He played in the mud and with rocks, built forts, attended cub scouts, played baseball, basketball, and football. Led the boys at recess in school yard football.  He always worked hard.

I ironed his white shirt and sent him off to priesthood.  He passed    the sacrament and gathered fast offerings in a white shirt, suit, and tie.

He had  grown-  he made new friends. His "old soul" set him a part.  Sometimes, he was lonely. He worked hard. He bore his testimony at the pulpit with two hands on the podium.  He stirred the old souls.

I ironed his white shirt and tie and sent him off to prepare the sacrament.  He was a teacher.  He sat up the chairs, cleaned up the chapel, took out the trash and became a home teacher.  He wore his white shirt, suit and tie.  He worked hard. He understood what it meant to stand alone in his old soul. He never wavered.  He stood at the pulpit and testified with his two hands on the podium- he stirred our souls.

I ironed his white shirt and sent him off to bless the sacrament.  He wore his white shirt, suit, and tie.  As an Eagle Scout, he chased his dreams, worked hard on and off the field.  He embraced his "old soul" and stood alone.  He did his home teaching, performed acts of service, learned humility, came to understand suffering.  He stood at the pulpit and testified with his two hands on the podium.  He stirred lonely souls

I ironed his white shirt and tie and sent him off to the MTC.  He wore his white shirt, suit and tie.  As a missionary, he will grow, feel the tender mercies of the Lord,  come to know his savior, be blessed by the gift of tongues.... two years he will testify, grow, stand with God with his two hands on the podium- he will stir searching souls. 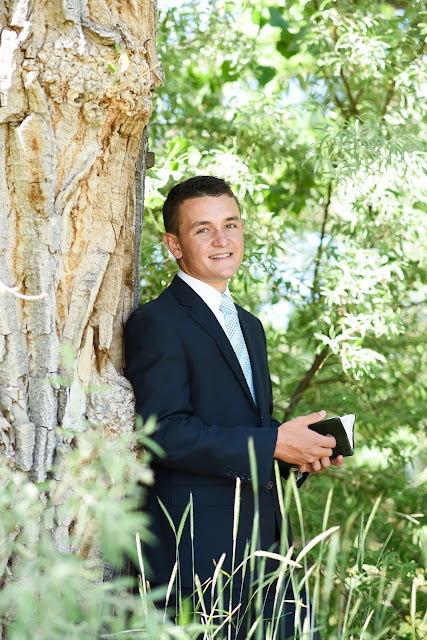 To say I miss Seleck would be an understatement.  But

I feel so blessed to have our son serving a mission.  His letters remind me so much of Rigby's letter when he served in Denmark 23 years ago.  Here is a little note I received  from Elder Rigby in the mail today: "  Dear mom, How are you holding up?  I miss you but I'm doing really well.  Some days things are kind of tough when we have to do a ton of stuff and my companion is a little noisy- but when he is quiet studying things go great!   It seems like you are having a fun time while I'm an gone.  I'm so glad that for the most part everyone is getting along.  How is Dad's toe doing (we think he broke his foot now- not just his toe)?   I'm so sad to hear about Sister Hughes'.  I'll make it a matter of prayer about how I can help Issac during this tough time. I love you mom.  You've taught me so many great things.  EVERYTHING you have sent has bee so nice.  Thank you all so much!  All the letters I receive, I hang on the door of my closet.  I have a picture of you and me in Nevada with the Buck you shot and I smile every time I see it.  Mom, I'll love you forever!

Just in time for Valentine's